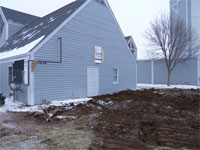 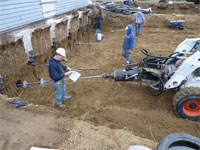 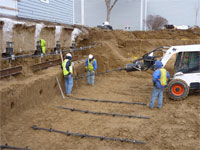 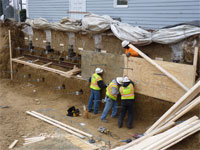 Placing formwork and connecting to top row of soil nails 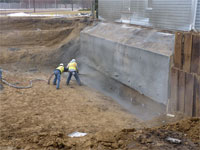 An addition was planned east of the St. Michael Lutheran Church sanctuary. The addition had plan dimensions of 40 feet by 90 feet and the design included a full basement 14 feet below the slab-ongrade floor elevation of the existing building. The west basement wall of the addition was proposed six feet from the east wall of the sanctuary, which would therefore require; (1) support of the existing foundation along the 40-foot east wall of the sanctuary, and (2) some method of soil retention to prevent foundation soils below the existing structure from caving into the excavation. A driven sheet pile wall was considered for temporary support, but the piling could not effectively be removed after basement wall construction without risk of damage to the structures. Leaving the sheet piling in place would be too expensive. The nearest test boring identified three feet of lean clay fill soils over stiff to very stiff lean clay (Peoria loess) to the bottom of the boring at 20 feet.

A helical soil nail wall was selected to provide the temporary soil retainage while the new basement walls were constructed and backfilled. With the helical soil nail option, the proposed west basement wall could also be moved three feet closer to the existing structure, providing an additional 120 square feet of basement area. The east foundation of the sanctuary was exposed and stabilized with Model 288 (2.875-inch OD) push piers. The piers penetrated the upper strata of lean clay soils and were installed to depths ranging from 64 to 79 feet. The ultimate pier capacities were at least twice the design working load. Four Model 150 (1.5-inch square) helical tiebacks were then installed with waler beams to provide lateral support to the piers. The tiebacks consisted of 8”-10”-12” triple helix lead sections and were installed to torque-rated ultimate capacities of at least 1.5 times the design working load (FOS≥1.5). The tiebacks were pre-tensioned to the design load after the walers were set. Twenty-four Model 150 helical soil nails were installed in a grid pattern, three rows of eight with a vertical spacing of four feet and a horizontal spacing of five feet. The soil nails had six-inch helix plates spaced evenly along the lead section and extensions. The soil nails were installed to lengths of at least 15, 12 and 10 feet, for the top, middle and bottom rows, respectively. Torque-rated ultimate capacities were at least 1.5 times the design working load.

The installation of the push piers and walers required an excavation bench be made adjacent to the existing building. With the project under construction during the winter months, frost protection had to be provided for the east sanctuary foundation. A wood-framed wall was constructed above the bench, connected to the top row of soil nails, sprayed with shotcrete, and then backfilled with loose-dumped sand. This sand backfill was also then sprayed with shotcrete to protect it from moisture infiltration. The shotcrete wall was at least 4 inches thick and reinforced with woven wire fabric and horizontal rebar walers at the nail heads.