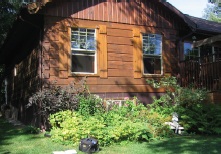 BEFORE: Windows of home out of square due to settlement

Twenty years ago, the Byam’s built a beautiful log home as their retirement home. Over that time, they began noticing severe cracking in interior and exterior walls as well as windows and doors becoming out of square and difficult to operate. It was later determined that one section of the home had been built over poorly compacted fill soils and caused settlement of nearly 5 inches. A permanent solution was required to stop the settling foundation and, if possible, restore the home back to its original, level position. 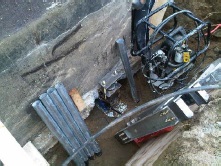 After considering several options, Clarke Basement Systems was selected as the contractor of choice due to their high level of professionalism, reputation, and thorough explanation of the solution. Clarke Basement Systems excavated the soil around the foundation walls and installed ten (10) Foundation Supportworks Model 288 Push Piers to permanently stabilize the foundation. L-shaped foundation support brackets were positioned below and against the footings and steel pier sections were driven approximately 20 feet to a competent load-bearing strata. Hydraulic cylinders were then used to lift the foundation nearly 5 inches to a level position, closing cracks throughout the home and bringing the doors and windows back into operation. The homeowners now have peace-of-mind knowing their foundation was permanently stabilized and they have the added assurance of a 25 year warranty. 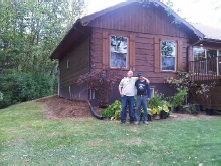 “We have never written a review before, but felt compelled by this company and their product to do so. Our search for a contractor to repair our cracked and sinking foundation began three years ago. The parade of pick-up trucks with guys and their clip boards began. Of the contractors that did return our calls and show up, they gave us one different idea after the other on how to solve our foundation problem. None of them had a feasible solution. Year three, and one more search on the internet, we found Clarke Basement Systems. At first it seemed too good to be true; it looked like they had the system that would solve our problem. From the very first contact with this company we knew they where different from all the other contractors we had dealt with. Their sales rep, Chris, came to our home on time with a computer in hand and an answer to our problem. Foundation push piers were recommended to stop the sinking foundation, and they would attempt to raise our home to its original position. The owner, Don, with his crew showed up on time and worked on the job until it was completed. Four days later, the sinking corner of our home had been lifted back to level! The property showed virtually no signs of damage. They were professional every step of the way. We would highly recommend this company to anyone who has a similar problem, or for that matter, any issue with their foundation or basement.” - Mr. and Mrs. Byam