SmartJack® System Installation for a 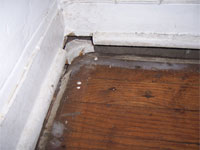 BEFORE: The floor system had settled more than two inches 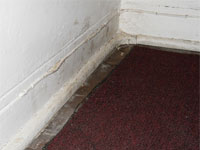 AFTER: The floor system is lifted back to a level position with the SmartJack® system 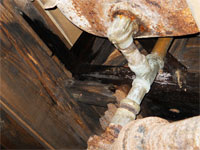 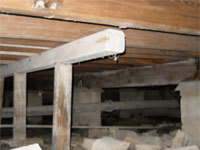 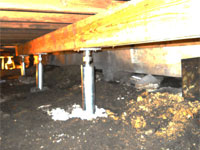 SmartJacks™ installed and attached to a new support beam

Over a period of several years, the homeowners began to observe cracks in drywall, uneven floors and noticeable settlement of the entire floor system. After failed attempts to remedy the problem by adding inadequate supplemental support under the floor joists, the homeowners consulted to assess the problem and recommend a long-lasting solution.

After determining that multiple framing members were severely distressed from age and the humid environment in the crawlspace, they contracted to complete the repair.

The project started by first reinforcing the double 2x8 girder by sistering additional pressure-treated 2x8 boards to each side. A pressure-treated 2x6 ledger board was also installed around the perimeter of the structure and was attached to the foundation walls to support the ends of the floor joists. Next, a total of twelve (12) SmartJacks™ were installed to support three new support beams that were strategically placed at locations throughout the crawl space. Finally, framing repairs were completed by sistering pressure-treated 2x10 joists to damaged floor joists in the crawlspace.

The entire project was completed within one week, and the homeowners were thrilled with the results. Not only had the deteriorating floor system been restored, but the SmartJacks™ were able to raise the floor system two inches and back to a level position.